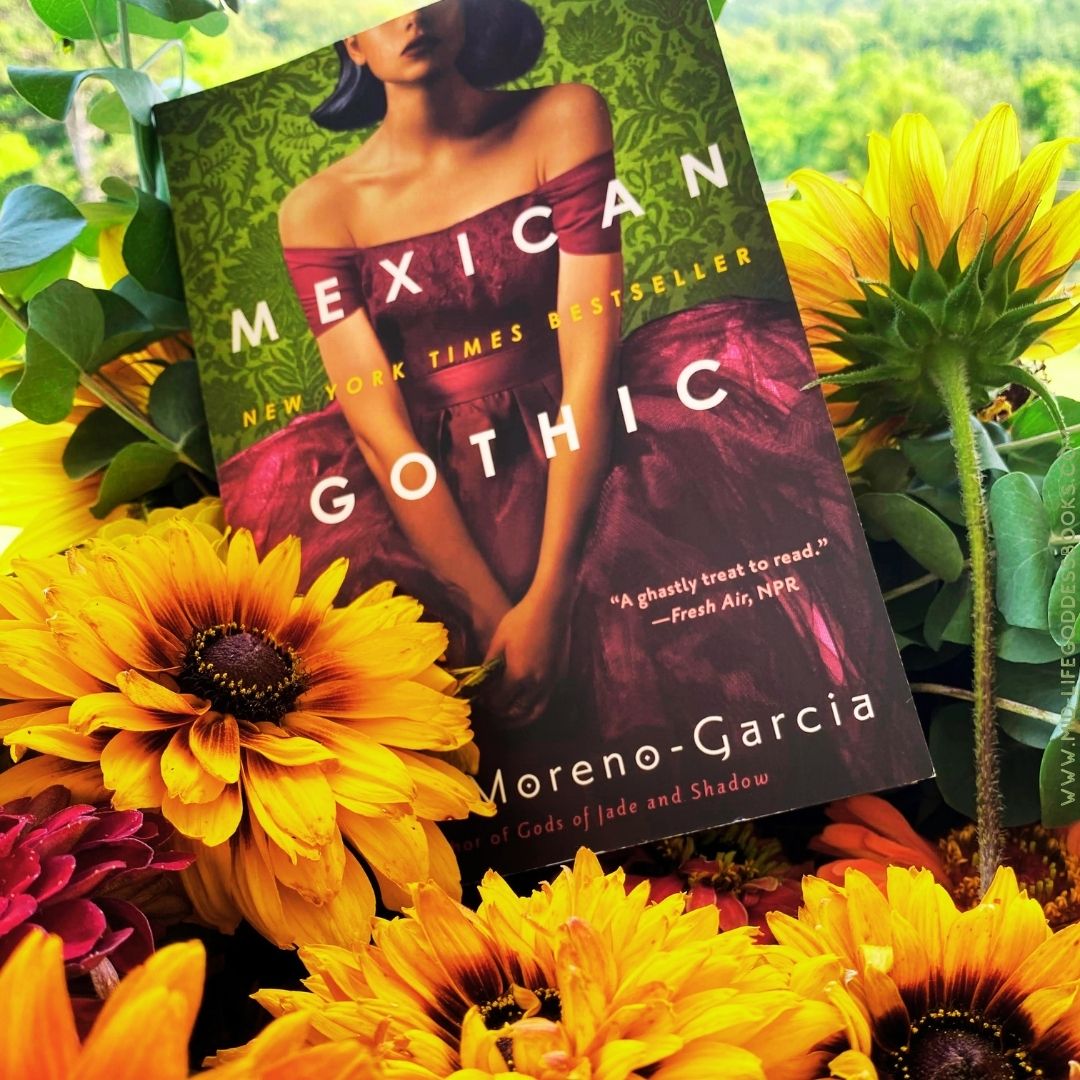 
I am actually almost speechless! I picked this book up at the airport because I was drawn to the beautiful cover and I have seen Mexican Gothic on several “best of” lists. While I am mainly a hopeless romance reader, I am wanting to expand my reading repertoire. This was a gothic horror story, but the writing was superb. Silvia Moreno-Garcia’s heroine, Neomi, is self-assured, smart, and witty. While describing the scary scenes, you are drawn into the colorful descriptions with trepidation and a feminist viewpoint.

Neomi is a new money debutante in 1950’s Mexico City, living in an active social scene with men following her around like puppies. She is a whimsical beauty who is given a challenge by her father. After a frantic letter with a disturbing plea for help from her cousin Catalina, he sends Neomi off to this remote old silver mining town to check out the newlywed and her current living situation. Once she has been received by Catalina’s new family, the Doyles, she begins to explore her cousin’s new home, High Place.

High Place is a super creepy crawly house teeming with moving mold along with a “zombie-like” staff. I was getting a VC Andrews “Flowers in the Attic” vibe as they were keeping her cousin, Catalina, tucked away drugged and “resting”. Neomi constantly challenges the Doyle family’s draconian rules including no speaking at dinner, no smoking, and no leaving the house. As Neomi ingratiates herself to this new family, little does she know that she should just go home before there is no turning back. But she cannot go without assuring her cousin is in a good place and she also has a deal with her dad that she does not want to jeopardize.

Francis is the Doyle’s youngest son and a shy artist-type. As Neomi begins to dream horrifying nightmares and starts seeing strange visions, Francis always seems to find her and get her back to the house. He is her chauffer, confidant, and eventual savior. The other characters include Virgil, Catalina’s too debonair husband, Howard, the decrepit patriarch and Florence, our spinster house mother of Francis. The last few chapters completely flip this whole scary story upside down and ties all Neomi’s unanswered questions in a creepy mushroom bow. And it is quite a doozy, but totally makes sense and turns this mythical gothic horror into a sweet gothic romance.

Mexican Gothic is a literary delight while still scaring the hell out of you. The horror aspect of this story is not anything that you will have nightmares about – although Neomi does deal with the disturbing visions with rationale in the beginning. If you are like me, I do not even watch horror movies because they keep me up at night. With references of Jane Eyre and Rebecca you get absorbed in the panic and disgust along with the simmering romance our author confirms in the last sentence. I wholeheartedly recommend Mexican Gothic as a momentary escape, even a beach read, that you will not want to put down once you start reading.

Too Good to Be Real by Melonie Johnson

There’s Something about Molly by Christina Hovland

Jana Aston's "One Night with a Nutcracker" Cover R

Jana Aston's "The Bacherlor on the Shelf" cover re

I have become somewhat of a book hoarding snob thi

Thought this was a funny marketing campaign for ou

There's Something About Molly by Christina Hovland

Ravaged With You by J Kenner ❤️❤️❤️❤